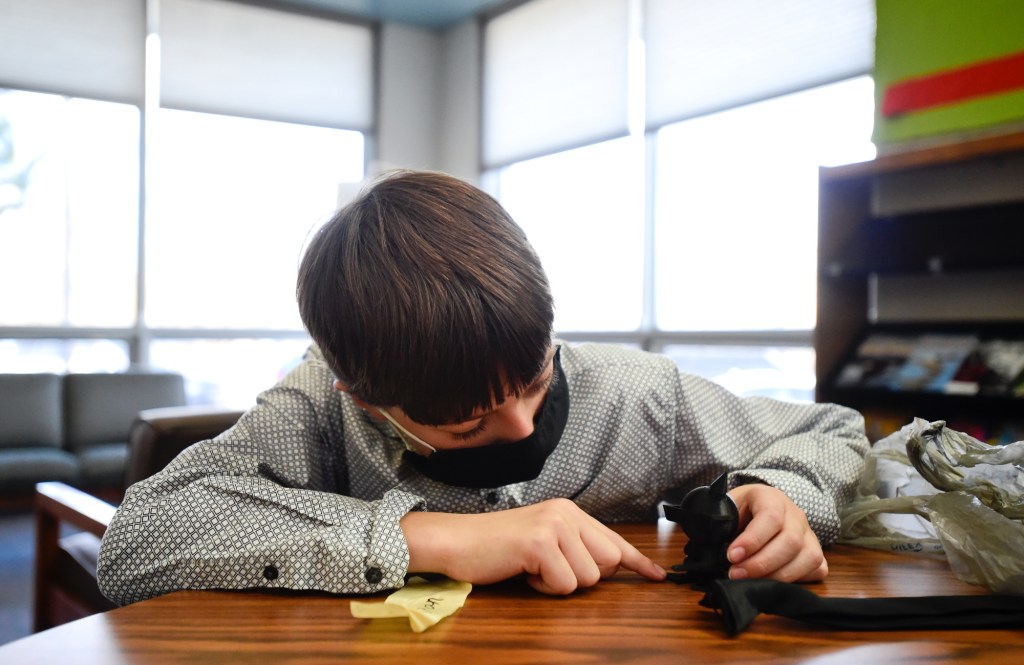 Sixth graders at Erie Middle School recently received a special delivery of the little 3D figurines they designed in their tech exploration class.

A new 3D printing lab at the district’s innovation center, dubbed the Disco Lab, has printed its projects as a pilot as the lab prepares to accept more class projects. The Disco Lab was the brainchild of Danny Ford, an Innovation Center paraprofessional who now runs the lab.

A storage room houses the 17 printers, a mix of more basic models and those that can print more complex designs or print in two colors of filament. Four other 3D printers are located around the center.

Ford has found a cloud-based system that allows students to submit their projects online from a computer or iPad and then send them to printers, eliminating the need to submit projects in person on a USB device. Ford delivers completed projects to schools using district mail.

“It makes 3D printing really accessible,” he said. “Even if colleges have a 3D printer, it may require too much maintenance and knowing how to use it.”

In addition to opening the online application for projects at colleges, he said, students at the Innovation Center and district robotics teams use the printers, which typically print 10 to 15 pieces a day. .

After testing the lab with more middle school classes next semester, Ford said he hopes to open it up to any student in the district, with only a small processing fee to cover materials and processing. Next year, the Innovation Center also plans to add a 3D design class that will use the lab.

Eric Berngen, coordinator of programs and workforce development at the Innovation Center, said it might also be possible to print classroom materials, such as a skeletal model for science students. .

“The sky’s the limit with this project,” he said. “It’s very exciting work.”

“I want to teach them how to get something you create digitally into real life,” he said.

But while his school has a 3D printer, he says, it’s hard to get an entire class of projects printed — and there’s no time for reprints if something goes wrong.

“It can take anywhere from 45 minutes to two hours to print a very small thing,” he said. “This district lab is a really great solution.”

The students’ drawings included a polar bear, a ring, a tree, a bracelet and a pumpkin.

Andrew Fonseca imagined an egg with legs and sunglasses. He said the program was difficult, especially determining the angles.

“Maneuvering was difficult,” he said. “It took a while to get the egg on the paws.”

Next steps for the Disco Lab include setting up time-lapse cameras so off-site students can watch their projects being printed. Another plan is to create a student project team, allowing high school students to work with a mentor to learn how to manage and process applications as paid employment.