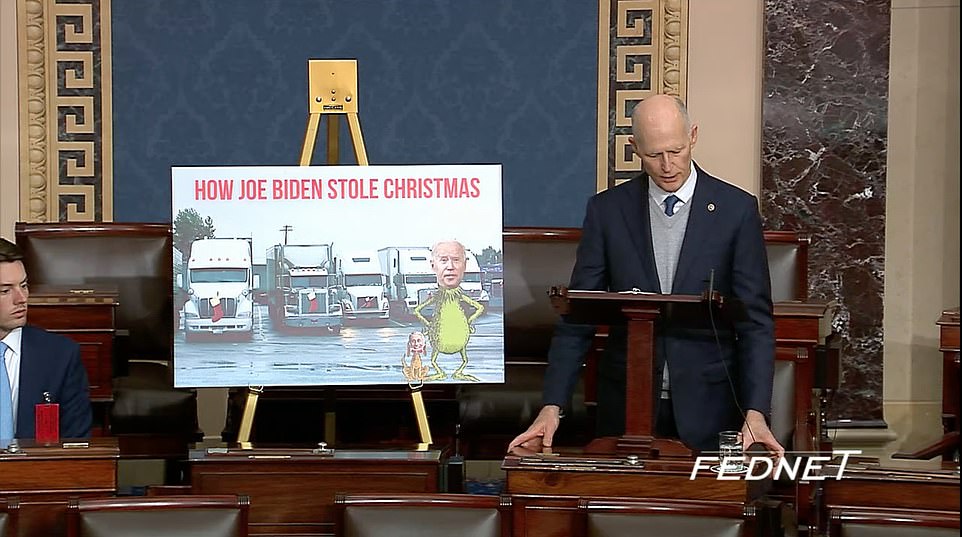 Republicans mock Biden with punny posters on Senate floor, including one showing Biden as Grinch

Republican senators came to the floor Thursday full of Christmas puns and carrying festive floor cards as they ripped President Biden over supply chain and inflation issues ahead of the holiday.

Florida Sen. Rick Scott put up a sign with trucks in the background, showing Biden as the Grinch and Dr. Anthony Fauci as his dog Max as he lashes out at the president over vaccination mandates and issues of inflation.

“We are three weeks away from Christmas and Joe Biden has destroyed this country,” he said. “Even Santa Claus with all his Christmas magic can’t fix it.”

“Secretary Raimondo and Secretary Buttigieg would rather play TV commentator than go to California and solve some of these problems that our distributors are facing.”

“If they don’t want to show up and do the job they signed up for, I heard there was an opening at CNN.”

Senator Joni Ernst brought a poster of Mariah Carey from the cover of her hit song, “All I Want for Christmas Is You.”

“If, like Mariah, you don’t want much for Christmas and don’t care about presents under the Christmas tree, this might be your year,” the Iowa Republican said. It’s because Bidenomics makes everything out of stock, delayed, unavailable or just plain unaffordable,” she said.

“You’re paying a lot more for a lot less,” she said.

“The supply chain problem is such a mess that not even Rudolph with his shiny nose can guide all the barges stuck at sea in the harbor on Christmas night!”

The Christmas-themed rants came as the Senate considered Biden’s Build Back Better Act.

“We are three weeks away from Christmas and Joe Biden has turned this country upside down,” said Senator Rick Scott. “Even Santa Claus with all his Christmas magic can’t fix it”

Senator Joni Ernst brought a poster of Mariah Carey from the cover of her hit song, ‘All I Want for Christmas Is You’

“On Christmas Eve, let’s see what goodies the Democrats are ready to hand out here,” Sen. Todd Young said.

Sen. Mike Lee, R-Utah, used his speaking time to introduce his “Stop the Grinch Act,” which he says would reduce supply chain issues

‘Santa – I don’t know if you’re listening, but if you are – when you make your list and double check it, remember President Biden promised taxpayers his Build Back Better plan will cost zero dollars, wasting money on tax breaks for the rich and adding – you guessed it – zero dollars to the national debt.

“To no one’s surprise, that promise ended up being a fa la la a lot of malarkey!”

“The truth is, the Biden bill costs $1.7 trillion, adds $367 billion to our debt, and provides a huge tax cut for millionaires.

“While the president certainly deserves a stockpile full of coal for breaking his promises to the taxpayers, even coal is in short supply right now and the price has soared to the highest level in over 12 years!” Ernst said.

Sen. Mike Lee, R-Utah, used his speaking time to introduce his “Stop the Grinch Act,” which he said would reduce supply chain issues.

“When the Grinch stole Christmas, it was a relatively simple operation that required a relatively simple solution,” he said. Unfortunately, cold, callous regulations and entrenched bureaucracies don’t have undersized hearts that could grow three sizes. Protectionist laws and labor shortages don’t warm the holiday spirit.

“By suspending a number of federal restrictions on ports, ships and trucks, we can help clear the backlog at our ports, put products on the shelves and gifts under the trees,” he said. he declares.

Sen. Todd Young, R-Ind., put up a poster with a Christmas tree surrounded by gifts, titled “The Night Before Christmas.” It was meant to represent the “Christmas presents” that the Build Back Better plan would deliver.

“On Christmas Eve, let’s see what goodies the Democrats are ready to hand out here,” he said.

“China has a gift under the tree, why don’t you just open the gift from China,” he said, removing the gift sticker and revealing the dollar signs on the poster below. ‘Oh, that’s a lot of money!’

‘It’s possible ? It says the rich. I’ll see what’s in it,’ he said as he pulled out a gift labeled ‘rich’ to reveal a salt shaker. ‘SALT!’

The giveaway referred to a provision in the bill that would raise the cap on state and local tax deductions from $10,000 per year to $80,000 per year.

Young then gestured to a stocking with the words “taxpayers” on it. He removed the bottom to reveal a picture of charcoal. “Oh my word, it looks like coal,” he joked

House Speaker Nancy Pelosi and Sen. Majority Leader Chuck Schumer insisted they would pass the $1.9 trillion Build Back Better bill before the holidays, but Sen. Joe Manchin, whose swing vote can make or break any legislation, has yet to give its stamp of approval.

The West Virginia Democrat said he wanted to be sure the legislation wouldn’t worsen inflation, which figures released Friday showed were up 6.8% from last November to November.

“We have to make sure we get it right,” Manchin said this week, speaking to The Wall Street Journal. “We cannot afford to continue to flood the market as we have done.”

Discussing his opposition to Build Back Better, Manchin cited an op-ed he wrote in September arguing that Democrats should stop trying to push through the inflation issues bill.

“I was worried at the time and said to take a strategic break,” Manchin said, adding that he was still “strong about it.”

The plan, passed by the House of Representatives last month, includes $400 billion for child and family support, $555 billion for climate change and $166 billion for housing assistance .

The best movie posters of 2021