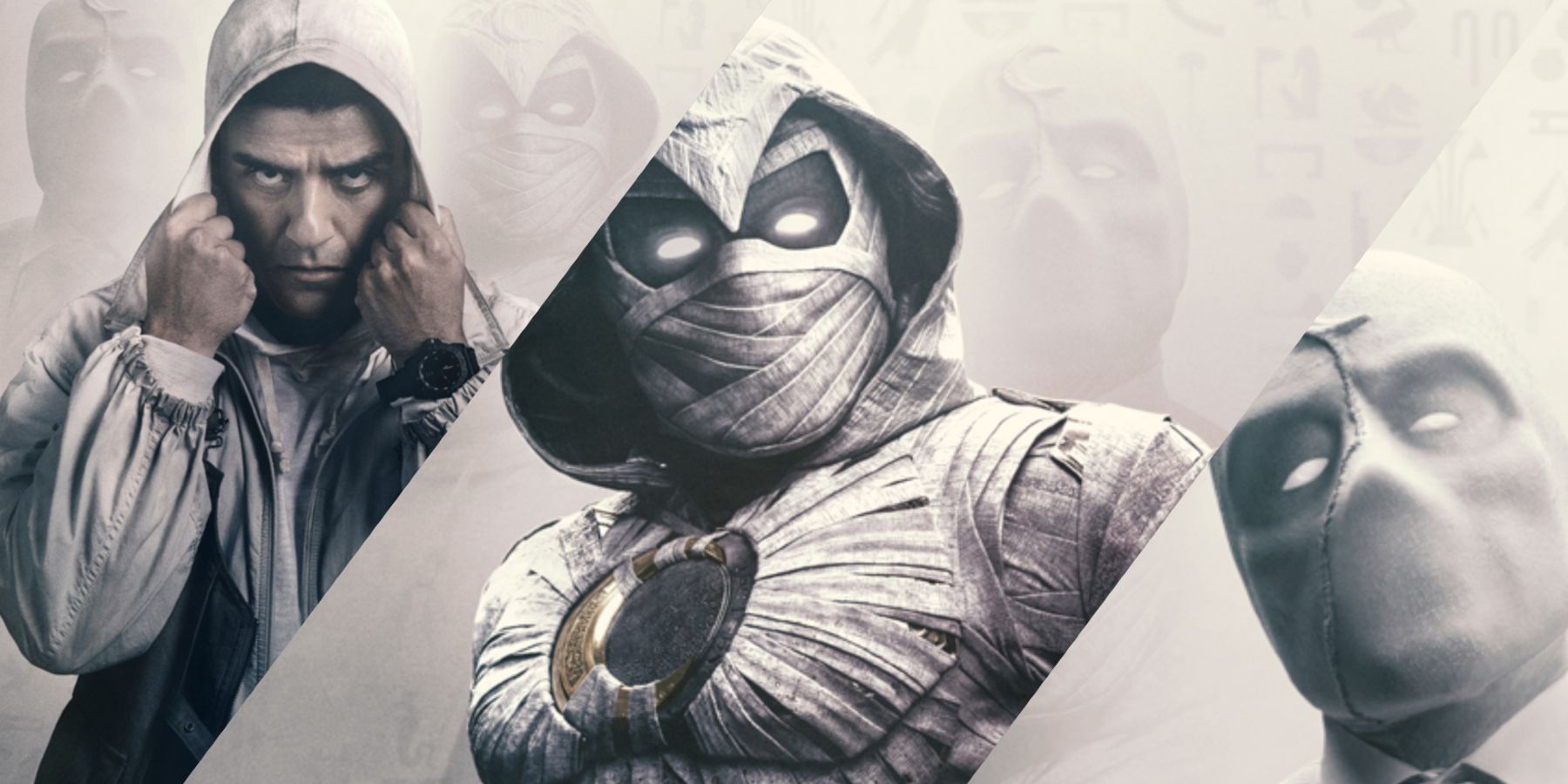 Disney Plus has released a new set of posters for its upcoming marvel studios series Moon Knight, showcasing the many phases of the new MCU superhero. These new images add more fuel to the fire, showcasing an in-depth look at Oscar Isaac’s portrayal of Marc Spector, Mr. Knight, and Moon Knight.

The first of three new Moon Knight posters focuses on Isaac, who will make his MCU debut in the upcoming Marvel Studios series. The story centers on Steven Grant, who discovers he has dissociative identity disorder and shares a body with a mercenary named Marc Spector. It’s unknown if Grant or Spector are present in the newly released image, which underscores the multifaceted nature of the character. Behind the hooded figure of Isaac in silhouette, the characters alternate superhero personalities, emphasizing their interconnected presence to the character.

The posters go through a repeating format, pushing a particular character to the fore while others linger in the background. The images provide a detailed look at the characters, but they also shine a light on the unique attributes each will bring to the table. For example, while Isaac tries to hide his face in the first poster, subsequent images show more confidence in his various superhero characters. Moon Knight takes center stage in the second frame, standing confidently in his essence, followed by Mr. Knight, wearing a unique air of confidence all his own.

Mr. Knight stands out from the crowd in the recently released images, especially since the character is absent from the images provided by the series. The physical character of Isaac’s Moon Knight came up many times, which in part helped fuel the anticipation for the series. Mr Knight, however, has been relatively quiet, apart from the rare published images showing the sophisticated look of the masked detective at street level. With the series’ arrival drawing closer, it’s understandable that the character will more than likely remain distant until he makes his on-screen appearance. It will be an experience to see how Isaac embodies the character and overall role of Mr. Knight in the series narrative.

Moon Knight seems to be delivering great excitement for MCU fans, but it’s unclear what role the complicated superhero will play across the full expanse of the multiverse. Previous MCU series on the streaming platform have offered glimpses of their connection to the larger puzzle, while others have remained somewhat vague on their journey. Head Writer Jeremy Slater hinted that he believed the goal was to have Moon Knight eventually become part of the Avengers, but the decisions would have to come from Kevin Feige to make the dream come true. Moon Knight promises to be a spectacle, which may be enough to appease fans if a strong bridge doesn’t form. Nonetheless, the series will be many audiences’ first introduction to the hero, emphasizing the need to build up the origin before bigger projects gain momentum.

Along with Isaac, Moon Knight will star May Calamawy and Ethan Hawke as the main antagonist, Arthur Harrow. The series will kick off a new year of MCU Disney Plus programming, which includes She-Hulk and Ms. Marvelas well as Marvel features expected in theaters later this year. Moon Knight comes from Egyptian director Mohamed Diab, whose previous work with hard-hitting dramas seems to intersect well in a story filled with the complexity of varied personalities and the seriousness of the main protagonist’s mental health.

What is a Deus Ex Machina and what movies use them?

Karl Anthony Simpson Jr. is a film/TV news writer for Game Rant and a lifelong film fan. In his spare time, he writes his own original screenplays and writes reviews for streaming content. Karl earned his bachelor’s degree from Pepperdine University, majoring in Creative Writing and Film Studies. He then earned his master’s degree from Johns Hopkins School of Education in Secondary Education.

Are you at risk for student loan default? | Smart Change: Personal Finances