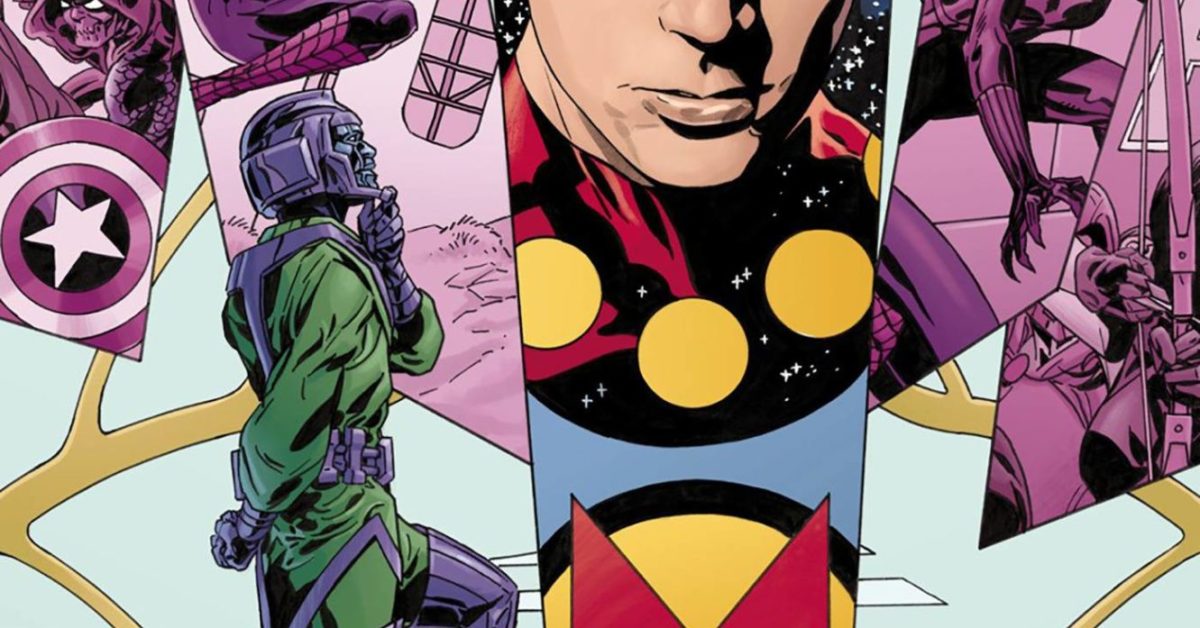 When will Marvel Comics release new miracle man drawn by Mark Buckingham? The answer is sooner than expected – March 9. Because Mark Buckingham designed the cover of the third printing of Timeless #1, the comic that teased the return of Miracleman on its final page, as the Marvel 2022 schedule promised the lineup of the long-awaited final issues of Miracleman: The Silver Age and then The Dark Ages from Neil Gaiman and Mark Buckingham. And even if it’s not quite there yet, it’s a step in the right direction.

The cover depicts Kang gazing into windows of the future, with Ben Reilly as Spider-Man, The Thunderbolts, a possible daughter of T’Challa and Ororo, as seen in the issue. But we never saw Miracleman, just his logo. Now we see exactly what Kang saw, and it’s a face of the Miracleman in question. Is the announcement of a Miracleman lineup finally about to arrive?

I was in the audience at San Diego Comic-Con in 2009, when Joe Quesada, Marvel Comics’ then-EIC announced that it had purchased the rights to Marvelman, “one of the most important comic book characters in decades,” from Mick Anglo. This was the first time a story had received so much traffic that it blocked the site. In June 2010, a “Marvelman Classic Primer” one-shot was released, featuring new art and interviews with Mick Anglo and others involved in the Marvelman story. In July 2010, a new ongoing series titled The Best of the Marvelman Family launched the “Marvelman’s Greatest Adventures” reprint. A reprinted hardback edition, Marvelman Classic Vol. 1, was released in August 2010. These reprints contain only old material. Alan Moore said he would donate some of his royalties from all Marvel reprints of his Marvelman stories to Mick Anglo. It was at New York Comic Con 2013 that Marvel announced that they had solidified their rights to Miracleman and that Neil Gaiman and Mark Buckingham would finish the story he started 25 years earlier. The series adopted a jumbo format, with each issue containing a reprint of the corresponding issue of the Eclipse Comics series, reprints of select Mick Anglo Marvelman stories, and non-fiction material such as Marvelman essays, photos, and design sketches. . The first issue, reprinting the recolored and re-lettered stories of Warrior #1 & 2/miracle man #1, was released in 2014.

Reprints continued, collecting remastered and recolored works from the original series, followed by hardcover collections. In September 2014, the first new Miracleman material under the Marvel Comics banner was announced. With a story pitched but never published by Grant Morrison which they wrote in the 1980s, drawn by Joe Quesada, it was joined by a whole new story of Pierre Milligan and Mike Allred. Reprints continued until #16 when the series was retitled Miracleman: The Golden Age which reprinted issues #17–22. Gaiman & Buckingham’s Miracleman: The Silver Age Issues 1-3 were announced for a 2017 release, but those solicitations were canceled shortly thereafter. At San Diego Comic-Con 2018 at a retailer luncheon, Marvel announced that the legal hurdles leading to the cancellation had been resolved and the new series was set to begin publishing in 2019 with the team. previously announced creative of Gaiman and Buckingham on board. But the new series had not yet appeared and no number had been requested. And now we have a cover…

TIMELESS #1 3RD PTG BUCKINGHAM VAR
MARVEL COMICS
DEC218555
(F) Jed MacKay (I) Kev Walker, Mark Bagley (CA) Mark Buckingham
HOW TO WIN A WAR AGAINST TIME?
A special year-end adventure that foreshadows what’s to come in the Marvel Universe over the next twelve months! Kang the Conqueror is a warrior, a destroyer, a subjugator, but even he is subject to the vagaries and vicissitudes of time itself. So when a parallel timeline threatens to crush the future that Kang has fought so long and struggled so hard to control, the Master of Ages has no choice but to go to war with time itself, struggling against the days of tomorrow as he struggles to prevent the end of what is to come!
With all the major players in the Marvel pantheon!
RATED T In Store: March 09, 2022 Order Deadline: February 06, 2022 MSRP: $5.99