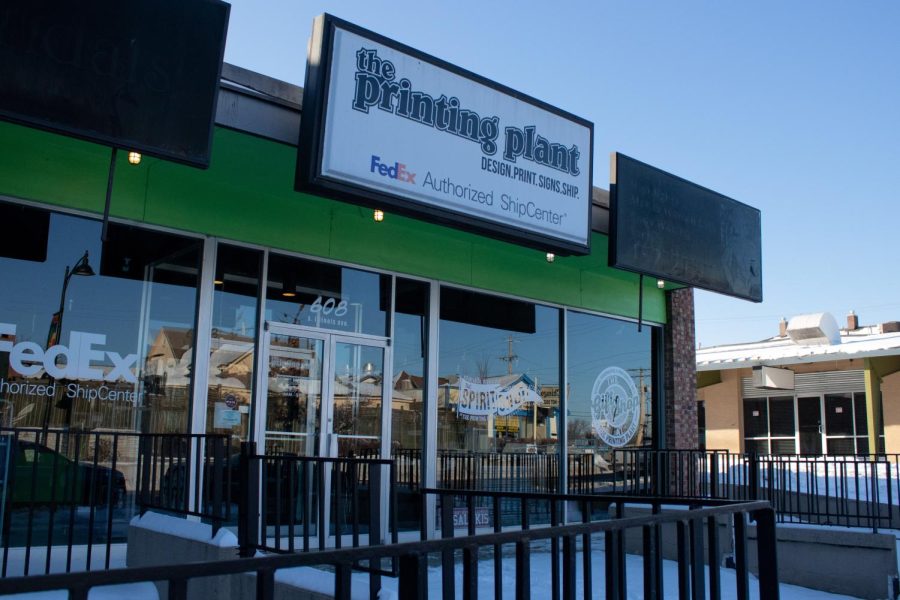 If you ever walk into the print shop, you’ll find that their store’s mantra perfectly encompasses their business model: think big – buy small.

In downtown Carbondale, Illinois, there is a humble little building that houses the printing press, owned by Jason Buehner. Its name is very clear on its purpose, but once you step in, there’s more in store than you might expect.

Opened under its original name, Copycat, in 1974, the store focused on providing the services typical of a copycat store. The store was renamed the Printing Plant before being bought out by Jason Buehner in 2007. He started working at the copy shop during his college years. Currently, he owns and runs the boutique with the help of his wife Meghann Buehner. According to her, when they first acquired the print shop, it was largely a standard copy shop, but as times and business practices changed, so did they.

In 2016, the print shop expanded with the aim of introducing the Awards Shop, a service focused on trophy engraving and award creation, and the debut of their Gift Shop in their upcoming new location which will offers more space to grow as a business.

“We are sort of several companies under one roof. We have our regular print as we always have. We have an awards shop where we make trophies and plaques. We have a gift shop where we do laser engraving, promotional items or giveaways. We do signage, where we do everything from vinyl to banners and more. said Jason Buehner.

In the spring of 2015, after its Murdale Mall location closed, FedEx approached the printing company to become a shipping center. The print shop initially had no space, but in May 2016 the Beuhns set up a small dispatch station at their old location, operating primarily on a folding table.

On August 15, 2016, when the print shop opened its current location at 608 S. Illinois Ave, in addition to the new services it offered, it had a fully functional FedEx shipping center operating out of the store. At the height of the pandemic, it was their saving grace.

“It was hard to figure out what to do. There were a lot of messages that weren’t very clear about whether we were supposed to be open or not. […] In the end we were asked to stay open as we were considered essential. Mainly because FedEx was integrated into what we were doing,” Jason Buehner said.

When it was determined that they were an essential business during the pandemic, the print shop opened its doors to other local businesses. The print shop helped keep the products of these businesses available to the public at a time when many were forced to close, by offering curbside and online options through their own shop.

The printing company began to focus on working with local Southern Illinois businesses such as Fired up Jellies and Jams, Steamshovel Coffee, Big Muddy Root Beer and more.

“Having this ability to be able to serve the community, the happier type of thing was kind of the thought process behind it,” Jason Buehner said.

Other companies had already begun to feature in the store, such as Sauced Up Smokers Barbecue Sauce, which had been in the copy store for many years under Jason Beuhner’s ownership. Meghann Beuhner said the creation of their business, 618 Candle Co., kicked off their project to promote local small businesses in their store.

618 Candle Co. is a melted soy wax brand, established in March 2020, that focuses on southern Illinois, naming some of the scents after local businesses and southern Illinois landmarks such as Giant City Peach Cobbler, Saluki Snickerdoodle Dandy, and Cold-Blooded Caramel Macchiato. , named after one of the local coffee bean businesses they operate at the print shop.

“Our hope with the product is that it would inspire people to think locally and buy locally. By showcasing some of these favorite places in southern Illinois, it sparks memories and creates great conversation starters and brings a little nostalgia to the product,” Meghann Buehner said.

Randy Miller, the owner of Steamshovel Coffee, first met Jason Buehner when he inquired about hand stamps for his business. Miller owned a cafe in Cobden, Illinois, and during the pandemic he closed his storefront and found he needed to refocus his business.

During this time he refocused on providing coffee to the area rather than serving coffee in a store and Jason Buehner approached him to be part of a project focused on promoting small businesses in his store.

“[The Printing Plant] is a company that truly cares. They get business. […] [Jason Buehner] wants to see us as successful Southern Illinois businesses. Then when we’re successful, we buy more product from them, and he’s more successful,” Miller said.

Fired Up Jellies and Jams is another Southern Illinois business that has received a boost during the pandemic with help from the printing press.

Michael Smith and partner Krista Daniel launched Fired Up Jellies and Jams in 2019 and began wholesale to other retailers later that year. They planned to do promotional events for their products in 2020, but, due to the pandemic, they were never able to do so. They had a hard time getting people to try their products, let alone buy them.

Daniel brought the project to Smith’s attention and suggested reaching out. Jason Buehner decided to take them over and Fired up Jellies and Jams has been in print for two years.

“It’s become an excellent outlet for small businesses like ours that didn’t have a lot of visibility. Because the print shop has been around for a while, we were allowed to take advantage of the exposure they already have and get our products out in front of people. Which for all of us, local produce is great, especially in a time when we couldn’t get out in front of people ourselves,” Smith said.

Both Jason and Meghann Buehner said running a small business helps to understand and help others who find themselves in similar situations, especially when it comes to helping local businesses during the pandemic. .

“They were trying to support us and we kind of just tried to band together to get a little bit stronger in terms of selection and variety and destination so we could serve the community,” Jason Buehner said.

He said he and his wife never planned to implement certain aspects of retail in their store as they have in recent years. When people started coming into the store to browse the print shop’s products instead of using the original copy shop services, Buehner found himself a little shocked. However, he thinks the positive response from the community has encouraged them to continue in the current direction they have taken and support the community as best they can.

“Because of COVID and the way we’ve adapted, it really made us feel like part of a big local community,” Jason Buehner said.

Meghann Buehner said she hopes to see more local products carried into the print shop in the future. She believes that small businesses are the lifeblood of small towns.

“The money they earn is theirs. It’s their livelihood […] if we can be a catalyst to help these other businesses survive and take care of their families, that’s huge for us,” said Meghann Buehner.

Staff photographer Dominique Martinez-Powell can be contacted at [email protected] To stay up to date with all your Southern Illinois news, follow the Daily Egyptian on Facebook and Twitter.