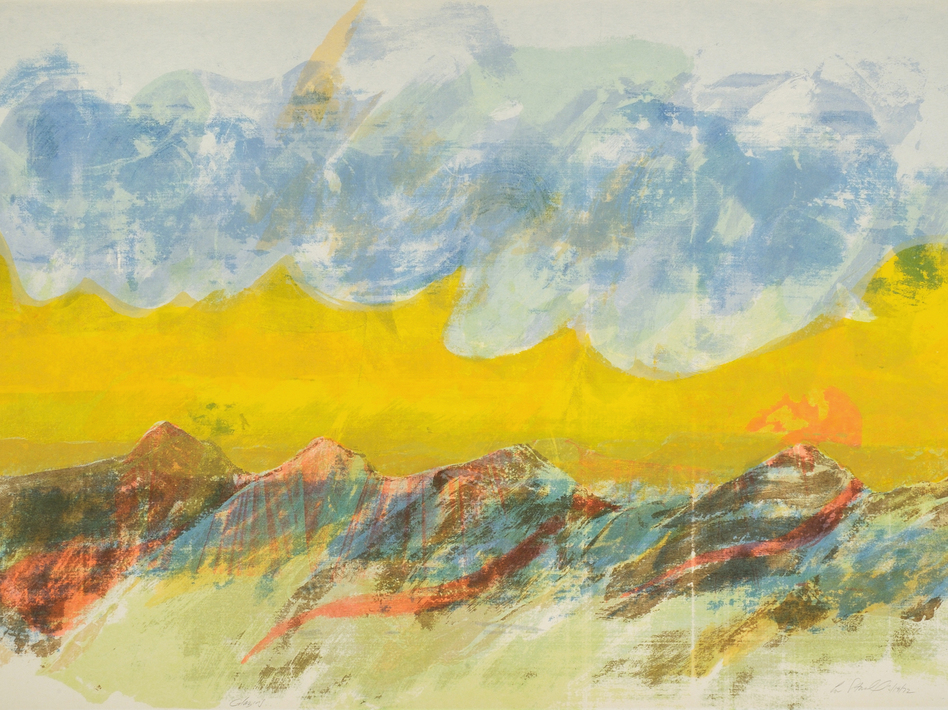 Lou Stovall and I each moved to Washington, DC in 1962. Born in Athens, Georgia and raised in Springfield, Mass., he came to study at Howard University. Born and raised in New York, I married in the city; my husband, Lou Stamberg, got a government job here. As newlyweds, we were thrilled to be in a new place, with the new and vigorous Kennedy administration.

In Manhattan, I grew up among artists and musicians. CC, a federal city of low, white-marble Greek buildings and cautious bureaucrats in suits and ties, seemed the last place an artist could flourish. It’s because I hadn’t met Lou Stovall and I didn’t know the serigraphs he made.

Over time, I met Lou: I sat with him on the board of the PEN/Faulkner Literary Prize for years, I ran into him at museum and gallery openings, and I discovered the community of creative men and women who gravitated around him and his artist wife Di for friendship, inspiration and tea (more on that later). They came to seek his help in printing their often brilliant serigraphs.

Lou has made prints with and for some great American artists: his hero Jacob Lawrence (known for his “Migration” series, which tours the best museums), his neighbor Gene Davis (whose striped paintings give the impression that a group of leaders got lost in a box paint of primary colors), his close friend Sam Gilliam (dyed and draped canvases along the wall) all came to Lou’s studio to do their serigraphs. Their collaborations have produced extraordinary works.

To support such collaborations, the printer had to “be open-minded, sociable, creative and welcoming, to create an atmosphere where artists can flourish,” says Danielle O’Steen, curator of the Kreeger Museum exhibition. of Washington’s “Lou Stovall: On Inventions and Color.” In his calm, focused way, Lou is all of these. National Gallery curator Harry Cooper in his foreword to Stovall’s new book Of the earth, edited by his son artist Will Stovall, describes Lou as “a small figure…quiet and smiling, like a Buddha amidst the clamor”. (This book – a collection of poems, etchings and drawings by Lou, is featured in a second exhibition at the Kreeger.)

In addition to creating a community of artists in Washington, Stovall discovered new ways to make silk screens. He first saw it in use when he was 15, when he worked as a stock boy — “a glorified errand boy,” he says — at a Springfield grocery store. The grocer sent him downstairs to get something. “I noticed this smell and discovered an old man printing signs in screen printing.” These were small posters advertising what the store was selling. “I just stood there watching, watching, fascinated.” He was hooked.

At that time, screen printing was mainly used for commercial posters. Bold, flat and attention grabbing signs – STOP or SALE. Curator Danielle O’Steen says “he thought the screenprint didn’t need to be flat”. And that’s how the experimentation began: “He and a few artists helped turn it into an art form.”

The artists have found in Lou Stovall a tireless worker, a true collaborator. He understood what they wanted, got inside their head and honored their vision.

Before computers and FaceTime, telephone and mail were part of the partnership. Now 85, Lou recounts how he and Jacob Lawrence got the Combustion printed decades ago. It’s a landscape, six little white houses in the distance, their brown roofs lined with flames. The foreground is framed by rows of spear-shaped leaves in varying greens.

Jacob Lawrence was in Seattle; Stovall in DC They mailed the colors and proofs, for the artist’s approval. Talking on the phone for hours (with Lou’s beloved jazz in the background), unable to see the work together, they counted sheet by sheet, so Lawrence could tell where he wanted slight color adjustments. “Each print took a while,” Lou says.

Here’s the tea party I promised. In the early years, Lou and Di Stovall would take breaks every day for tea “and some delicious sweets,” Di says. Artists and close friends would come. They all knew to be there around Lou’s print schedule. He printed color after color on the same piece of paper. It took a while.” “Four colors at least, before dinner. The third color was before tea time,” Di explains. “Then the four or six visitors crowded into our small kitchen. Nobody bothered to wait. It was beautiful to watch.”

Along with forging a community and discovering new ways to make screen printing look like watercolor, pastel, or oil instead of opaque, flat poster color, the master printmaker creates his own works of art. ‘art. Like this, a burst of technicolor colors that looks flaky on the page.

If, like Lou Stovall, like me, you believe that big cities should welcome art creators as well as political and financial decision makers, you will see all that Stovall has brought to Washington, DC through his hospitality, his technical skills and the serigraphs he does himself and with others.

Art Where You’re At is a casual series showcasing online offerings at museums you may not be able to visit.