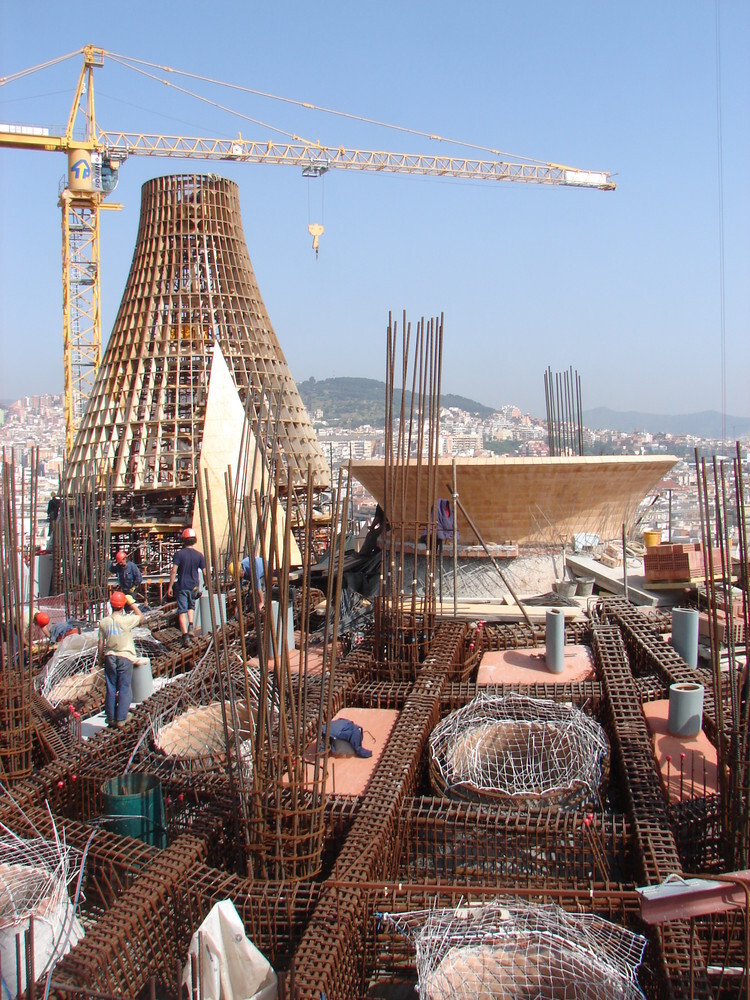 From artisanal stone to 3D printing: the technological and material evolution of Gaudí’s Sagrada Familia

From artisanal stone to 3D printing: the technological and material evolution of Gaudí’s Sagrada Familia

A masterpiece is often defined as the most remarkable work of an artist’s career, one that highlights the peak of his techniques and ideals. the Mona Lisa by Leonardo da Vinci; that of Michelangelo Pieta; the Beatles’ Sgt. Pepper’s Lonely Hearts Club Group album. There are many examples, which are not always unanimous. But what if what many consider to be the masterpiece was started by someone else, the credited creator did not live to see its completion, and almost all of its documentation has been destroyed? The Catalan architect Antoni Gaudí and his famous Temple Expiatori de la Sagrada Família are examples of these complications. From high quality stone construction to the most modern 3D printing techniques and high strength concrete, many technologies have been and continue to be incorporated into the construction of the project.

In 1882, the architect Francisco de Paula del Villar undertook the project of the church following the orientations of the time and thus used classic neo-Gothic elements: five longitudinal naves, ogival windows, buttresses and a pointed bell tower. However, due to disputes with the Catholic Church, Villar resigned from the work and Antoni Gaudí, a 31-year-old architect, was made responsible in 1883, as shown in chronology of work. While the cruciform plan of the original project was maintained, Gaudi made many significant changes to the building such as angular columns and hyperboloid vaults, eliminating the need for buttresses. By removing those important structural pieces that could withstand the horizontal thrusts of the heavy roof, the architect instead proposed the building’s iconic branching and sloping columns.

Since then, the project has always been under construction and is expected to be completed in 2026, the centenary of Antoni Gaudí’s death. But one can imagine that a project that has been going on for more than 130 years, with a few stoppages, has seen several changes in construction methods and materials. “The first period of construction, the one that had Gaudí as the architect in charge of the works, goes from 1883 to 1936. At that time, the traditional materials of the time were used, notably stone masonry with lime mortar as a binder. [1] Between 1914 and 1926, Gaudí lived on the construction site of the church, devoting himself exclusively to the works and making numerous plaster models of the pillars, naves, facades and other construction elements, with the aim of transmitting his ideas. to employees.

Shortly before that, in 1901, the first cement factory in Catalonia was founded by Eusebi Güell, friend, supporter and patron of Gaudí. Researchers [3] point out that one of the reasons why reinforced concrete took a long time to reach Catalonia was due to the traditional Catalan techniques optimized from the region, such as masonry arches (Catalan vaults) supported by metal beams, which presented a good cost-benefit ratio for construction and reduces the need for other solutions.

From there, Gaudí began to experiment with the material, which was used in the construction of Parc Güell, Casa Milà and Colônia Güell church. In the construction of the Sagrada Familia, reinforced concrete was used for the first time on the spiers of the facade of the Natividade, built between 1915 and 1934.

Ten years after the death of Gaudí, hit by a tram near the construction site, a fire destroyed most of the plans and drawings of the office. Fortunately, some models were saved, which made it possible to redo a large part of the project documentation according to the architect’s ideas.

Some downtime due to World War II and the Spanish Civil War delayed the work. Most of the finishing decisions, some structural solutions and some details and connections between different materials had to be defined by the following generations of architects and engineers working on the building, who sought as much fidelity as possible to Gaudí’s original ideas. .

“From 1944, buildings of which concrete was already one of the most important materials resume construction. During these years, they mainly used Cyclopean concrete in the filling of the walls and reinforced concrete in the structural elements. [2]. “From the 60s, reinforced concrete began to be widely used in construction, but in the 90s a new stage opened at the most famous building site in the world. It was around this time that public interest in the Sagrada Familia increased dramatically, resulting in an acceleration in visits and income. As a result, work began to incorporate many new advancements into the construction process, including several cranes and the start of computer modeling experiments of complex geometries. “Two events symbolize the changes that have taken place since: the increase in income which has allowed us to accelerate the pace of construction and the introduction of new technologies in terms of materials, design and construction process. The main focus in recent years has been the construction of the naves. This resulted in the lifting of the perimeter walls (completed in 1999), the interior columns and vaults, and the curves of the main body, which are now complete; they currently operate on the transept and the apse [2]”.

Almost all the building elements are currently built in concrete in the church of the Sagrada Familia, often covered with natural stone. Concrete appears in various forms: prefabricated elements, reinforced concrete, solid concrete and special concrete parts with very high structural strength, as in the columns of the apse and the transept, where microsilica has been introduced into the concrete mixture. , reaching a resistance of 80 MPa. . In other parts of the structure, due to Gaudí’s complicated geometry, fittings and the inability to increase the cross sections, the concrete elements had to be developed with high fluidity and strength.

Additionally, over the past decades, the Sagrada Familia has embraced contemporary digital design and construction technologies. Architects and craftsmen use programs such as Rhinoceros, Cadds5, Catia and CAM to understand complex geometries and visualize the building as a whole. The process uses stereolithographic 3D printers that build the prototypes layer by layer, resulting in a plaster-like material, a method that allows builders to manually modify prototypes to meet specific construction demands.

The construction of the Sagrada Familia took so long that the technologies and building materials changed dramatically from start to finish. Many researchers wonder if it could have been really built with the materials of the time when it was designed while following all the forms imagined by the genius of Catalan modernism. Would the project have been adapted by Gaudí if he had lived to solve all the design problems? Or is it his genius, as some researchers have pointed out, to have developed a project that allows the incorporation of new technologies and new materials over time?

This article is part of the ArchDaily topic: New Practices, proudly presented by PERI. PERI The Future Products and Technologies department studies disruptive technologies that have the potential to fundamentally change the construction industry. The goal is to recognize the signs of the future and help shape that future. By a methodical approach, PERI thus broadens its core competences and acts as an undisputed pioneer in the market. Learn more about our monthly topics. As always, at ArchDaily, we welcome contributions from our readers; if you would like to submit an article or a project to us, please contact us.