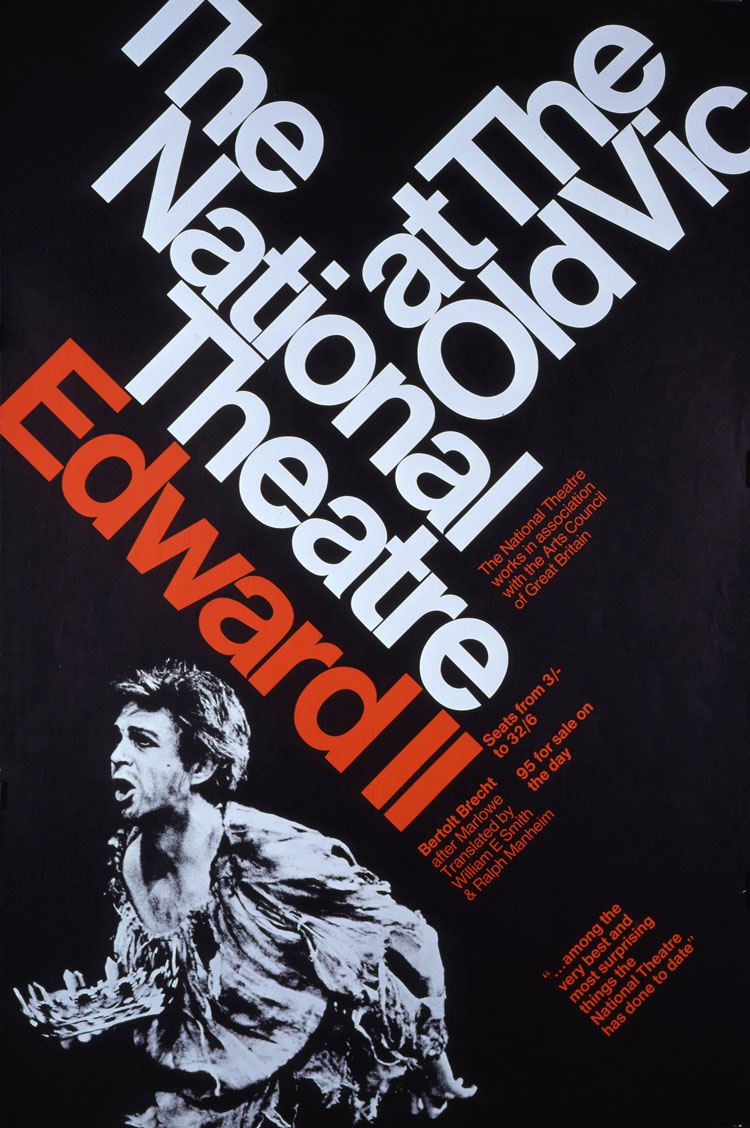 UK theaters are perhaps best known for their outstanding performances and intriguing sets and costumes, but the power of graphic design in attracting visitors to their shows cannot be underestimated.

This is the basis for a new exhibition at the National Theater in London, which presents the company’s graphic design history through posters created to advertise the theater’s past productions.

The National Theater was founded in 1963 and was based for 13 years at the Old Vic Theater in Lambeth. In 1976, the company moved to its own dedicated building in Southbank and, since its inception, has produced over 800 pieces.

Chronological posters of the last 54 years

National Theater Posters is a handpicked selection of the company’s extensive theatrical history in visual form. Presented chronologically, the exhibition reveals the different graphic styles adopted by the five creative directors who have headed the theater’s internal graphic design department for 54 years.

The exhibit was curated by Rick Poynor, professor of design and visual culture at the University of Reading, and designed by current National Theater Creative Director Ollie Winser, who runs the 10-person in-house graphic design studio. The space was designed by the theater’s exhibition team.

The organization is unique in that it has always emphasized the importance of having graphic design experts rather than commissioning work from outside, Poynor says.

“There is tremendous continuity in the theater’s approach to producing graphic images,” says Poynor. “She has always had an in-house graphics department. It’s unusual for cultural organizations to operate like this – normally they have a high turnover of employees.

Although the bizarre National Theater poster was designed by Neville Brody, the show focuses on the work of in-house creative directors – the late Ken Briggs, the late Richard Bird, Michael Mayhew, Charlotte Wilkinson and the current Chief Winser and his team. .

Swiss modernism in illustration and photography

Based in the theater’s Wolfson Gallery, the exhibition features 32 original printed posters and a digital slideshow of over 100 posters.

The visual timeline shows the individual styles of the five designers, from the typographic typography, Swiss Modernism by Ken Briggs and the pictorial and illustrative take by Richard Bird to the consistent black and white images by Michael Mayhew paired with the colorful typography and to Charlotte Wilkinson’s emphasis on photography. and artistic direction.

Visitors will also see key transitions in the format and branding of the posters, as the full cast lists were removed along with the classic “NT” logo, which was replaced by the theater’s full name in the 2000s.

“I wanted to highlight the key approaches, including typographic, illustrative, photographic, artistic and posters emphasizing branding,” says Poynor. “It was a careful curating process, choosing some posters that stay in the mind longer and are more powerful, but also choosing those that work together in small groups. “

“A theater poster should make you want to know more”

Richard Bird’s 1981 poster for William Shakespeare’s Measure for Measure is one of the curator’s favorites.

“Like so many of Bird’s works, they are unlike the others he did,” Poynor says. “He just had this versatility. It’s pre-digital, but he managed to create a photographic effect on the title, where the letters have been distorted and they appear as if they are waving in the sky on a flag.

“The photograph appears to have been taken on a tropical island,” he adds. “It’s a warm poster with a Caribbean twist, unlike what you would expect from Shakespeare. It intrigues you and makes you want to know more – that’s exactly what a theater poster should do.

Next to the range of final designs, there are three display tables at the exhibition that illustrate the “process stories” of three key posters in the history of the theater. These include various iterations and rough work that led to the final part.

The exhibition also includes a film featuring interviews with current and past creative directors of the National Theater, as well as a reading area where visitors can leaf through an exhibition book.

The 250-page book, National Theater Posters: A Design History, was published by Unit Editions and features a wide selection of graphic prints from the theater.

The graphic design of the exhibition space itself also borrows from the rectangular pattern of the poster. The titles, text and captions appear on posters of different sizes, which are pasted directly to the walls in different colors and finishes.

“The 51cm x 76cm (20” x 30 ”) ‘double crown’ poster format is still something we use around the theater building today,” says current Creative Director Winser. “It made sense to celebrate the famous ratio by using it as a backdrop and information medium for the exhibition.

“Talented designers who are not known”

Showcasing both beautiful finished pieces and explaining the process by which the designers got there, the show is aimed at theater-goers as well as design enthusiasts, Poynor explains.

“For an audience not specializing in design, this will offer something educational, fun and interesting,” he says. “For visual artists, this exhibition will show that the archives of the National Theater are an important body of work, with hundreds of posters created by talented designers, some of whom are not well known.”

National Theater Posters runs until 31 March 2018 at the Wolfson Gallery, National Theater, Upper Ground, Southbank, London SE1 9PX. Free entry. The exhibition is accompanied by a series of lectures in October and November, which cost between 3 and 7 pounds. For more information, head here.

The book, National Theater Posters: A Design History, is published by Unit Editions and available for £ 35 from Single editions online.