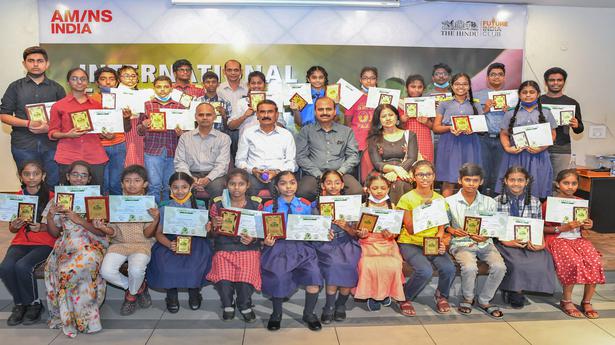 Earth Day: Children show off their skills in elocution and poster design contests in Visakhapatnam

Children from various schools in the city showcased their poster design and public speaking skills in a contest organized on the occasion of Earth Day-2022, by The Hindu FIC and Arcelor Mittal Nippon Steel (AMNS), at the Visakha Public Library here on Friday.

More than 200 students from various schools participated in the junior and senior categories.

Coming to honors in the junior speech category, the first prize was won by Aanchal Patra from Little Angels School (MVP) and the second and third places were taken by Poorvi Rajak again from Little Angels and K. Siddarth from Sri Prakash Vidyaniketan , Payakraopeta.

In the senior category (elcoution), the first prize was won by Thanya from Visakha Valley School, and the second and third prizes were won by Mr. Tanusree from Little Angels and Abhishek Singh from Oak Valley International School.

The theme of the speech contest was “Investing in our planet…because Green Future is a prosperous future”.

In poster design (juniors), first and second prizes were won by Tiyasa Mandal and Debesh Ghosh of De Paul School, and third prize was won by G. Nitya Srivalli of Little Angels School .

Presenting the awards, feature guest T. Rajendra Reddy, chief environmental engineer for the AP Pollution Control Board, said Earth was the only known blue planet in the universe that supports the life in different forms.

“We haven’t gone deep into space yet and at the moment Earth is the only planet that has life. And to sustain the planet we need to balance it. We are already experiencing abnormal phenomena and climate change and it’s time to take care of the planet,” he said.

According to him, around 78% of the planet is already urbanized and the temperature has already risen by around 1.5° Celsius. It is predicted that it could go higher and it would be disastrous if it did, Mr Rajendra Reddy said.

He advised the students to use electricity, water wisely and learn how to manage solid waste effectively.

Earlier, DS Varma of AMNS, said it is the policy of the group to plant trees and so far more than a lakh of trees have been planted in the city and in and around their factory.