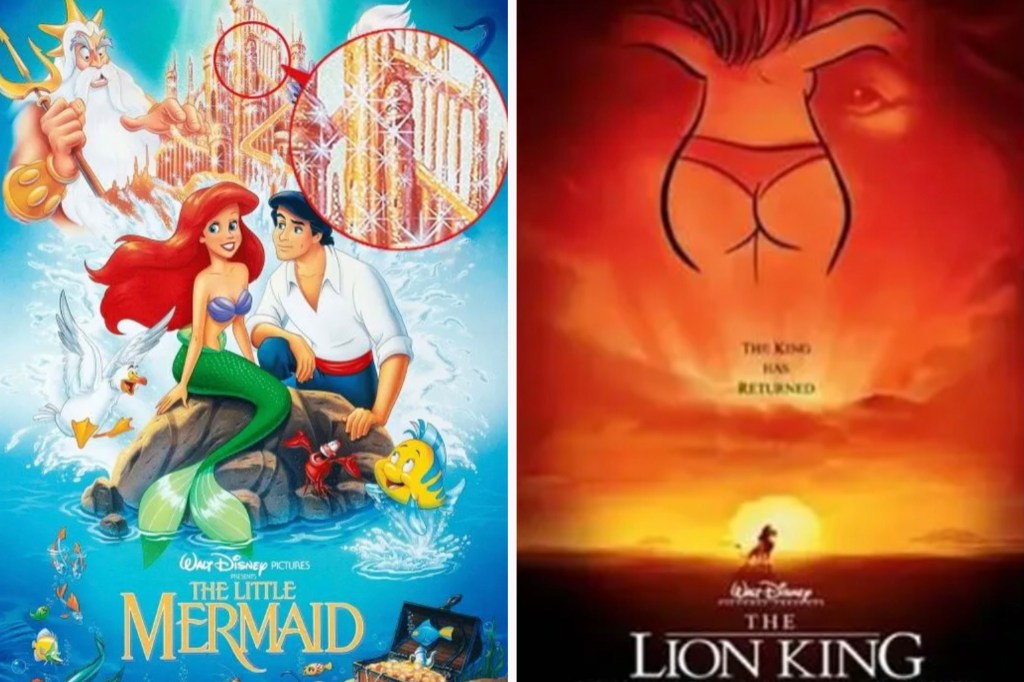 Can you spot the racy hidden messages in these classic Disney posters?

Best known for entertaining children around the world, Disney has also developed a reputation for some secret and naughty messages.

adults who grew up with Disney Movies began realizing the naughty messages they missed as kids as they revisited their favorite childhood movies.

Eagle-eyed Disney fans have become convinced that the entertainment giant has introduced sexy messages into its movies, and especially its movie posters.

Take, for example, 2010’s Tangled based on the Rapunzel fairy tale.

The movie poster shows Rapunzel using her long golden locks as a kind of lasso to trap handsome thief Flynn.

But fans are sure the hair wrapped around her body is deliberately styled to spell “sex.”

While The Lion King fans think they’ve spotted something very sexy on Simba’s face in the ‘The King is Back’ poster.

Some people believe that the form of a nearly naked woman can be made out along Simba’s nose, and have even taken the time to draw her to prove their point.

And in promotional posters for The Little Mermaid, fans think King Triton’s palace has some very phallic features on the outside.

Meanwhile, a cover for A Mickey and Minnie Mouse Adventure sees Minnie’s blue dress unfortunately looking like a phallus according to some Disney fans.

These are just a few examples of the cheeky side of Disney with adult fans now starting to hear innuendo in many of their favorite films.

classic movie Aladdin has a lot of cheeky moments – most of them courtesy of mad genius.

Its sequel, Aladdin and the King of Thieves is no exception either, but some of the jokes may have gone over viewers’ heads when they were kids.

Now that they are adults, many have suddenly realized that a joke was about sex.

The genie, voiced by the late great Robin Williams, helps Aladdin and Princess Jasmine prepare for their wedding.

However, before the big day, Aladdin reunites with his long-lost father Cassim, who is obsessed with finding the Hand of Midas, which turns everything it touches into gold.

Chaos then ensues, and at one point Aladdin and Jasmine are standing on top of an elephant when one of the villains hits him in the back with something sharp.

The animal quivers, leaving Jasmine and Aladdin shocked, before the Genie jokes, “I thought the earth wasn’t supposed to move before the honeymoon?”

One fan wrote online: “Never caught this one as a kid. Only Robbin Williams could get away with a joke like that.

Another added: “I’m 30 and didn’t know what that meant. I had to look for this.

It’s not the only rude moment in a Disney movie, because Rescuers accidentally featured a topless woman, while The Little Mermaid had to delete a scene who looked like a character had become overexcited.