Valentine was born on July 29, 1938, in Brigham City, Utah, and attended Box Elder High School and then Utah State University, where he earned full scholarships in music and chemistry. To help with college expenses, he worked as a chemist at Dugway Proving Ground in Utah. While an undergraduate, he changed his major to English and earned a bachelor’s and master’s degree in English at Utah State University. He also did additional graduate work at the University of Utah.

Valentine married Kristin in June 1967 and together they moved to Thessaloniki, Greece to teach at Anatolia College from 1968 to 1969. During this time their daughter was born. Later, Valentine taught English at the University of Kentucky. When the family moved to Arizona, Valentine taught linguistics at ASU. In 1996, he earned his certificate from the Scholarly Publishing Program at ASU’s College of Liberal Arts and Sciences.

Her lifelong friend, Tom Phelps, who was a best man at Valentine’s wedding, remembers his first meeting with Valentine when they were students at Utah State University.

“I was a fine arts student and he was doing a master’s degree in English literature. I learned that he had an undergraduate degree in chemistry and English, and I thought it was a weird mix of subjects, but he said Greeks studied everything. I couldn’t argue,” Phelps said.

Gene and Kristin Valentine have been co-authors throughout their academic careers, taking sabbaticals together in Spain and New Zealand, and publishing both scholarly journal articles and textbooks in the fields of ethnography. and human communication. Gene Valentin also served on the National Endowment for the Humanities Review Board for several years. 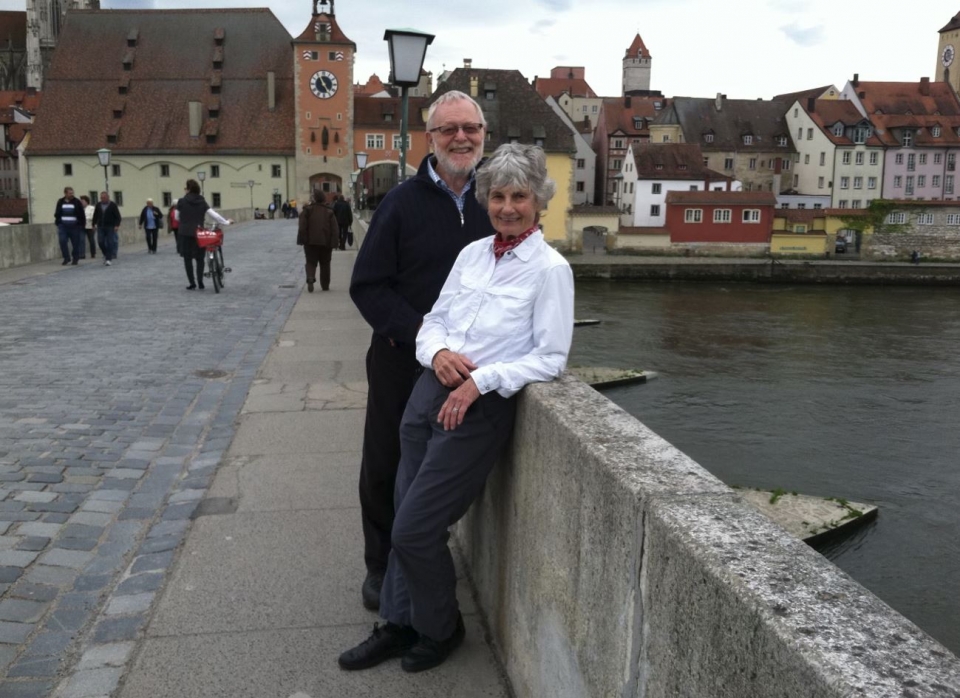 Gene and Kristin Valentine on one of their many international trips. 1 credit

In addition to her many scholarly writing projects, in 1979 Valentine combined her early years of restaurant cooking and her experience living in Greece and wrote a Greek-American cookbook, “Greek Cooking at its American Best”. , with his colleague Ellen Vidalakis Furgis.

In 1979, Valentine established Almond Tree Press for his publishing efforts, taking the name from Greek mythology and the almond tree, which has symbolized the rebirth of nature since ancient times. During Valentine’s tenure at ASU, he took courses in printmaking at ASU’s Herberger Institute School of Arttaught by professor emeritus Jean Risseeuw. 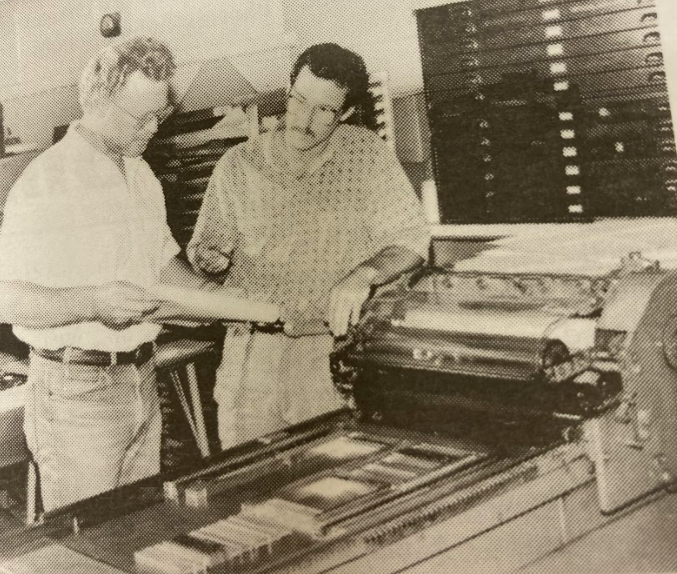 This intersection of language and art led to a new passion for Gene for letterpress printing and papermaking. As a result, in 1982 he purchased a Vandercook press, on which he hand-printed boards, books, and brochures on paper he made from plant fibers. 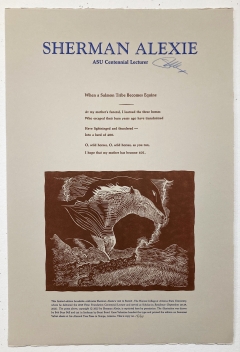 He then became the editor of ASU’s Pyracantha Press, an independent publishing house of the ASU School of Art, run by Daniel Mayer, a close friend and colleague of Valentine’s.

“Gene was a joy to have around Pyracantha Press, where he contributed on many levels with his extensive knowledge of languages, typography, editing, proofreading for projects and his quick wit to bring levity about anything,” Mayer said.

Throughout the 1990s and 2000s, Valentine created the annual commemorative broadsides for Barrett, Honors College Flinn Foundation Centennial Lecturers, and scholars-in-residence on his Vandercook Press, and this work has been featured in the Distinguished Voices Review, published by the ASU College Emeritus.

His work can be seen on ASU’s downtown Phoenix campus, archived in ASU’s Hayden Library Special Collections, and was recently featured in “The Art of the Broadside” exhibit at ASU’s Pyracantha Press on the Tempe campus.

His collection of pop-up books is also on display in the Hayden Library’s Rare Book and Manuscript Collection. 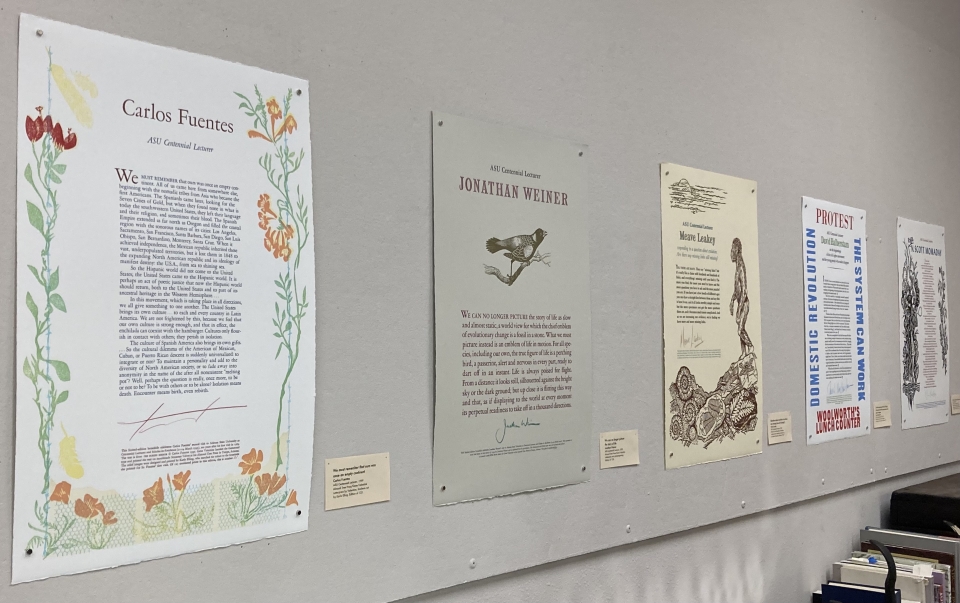 “Art of the Broadside” exhibit at ASU in 2021, featuring work by Gene Valentine. Credit: Mayer/ASU

In 1998, Valentine began a collaboration called Paper Project with Professor Charles Kazilek of ASU. Using the ASU Keck Bioimaging Laboratory’s Laser Scanning Confocal Microscope, a series of scans were performed on successively deeper layers of hand-made and molded paper. These images were then digitally assembled into a single composition for each type of paper.

The resulting compositions, which can be viewed through 3D glasses for full effect, have proven useful in understanding how fibers are intertwined in a specific paper. They have also become 3D works of art that have been featured in several exhibits including the Arizona Science Center and the Arizona Museum for Youth. 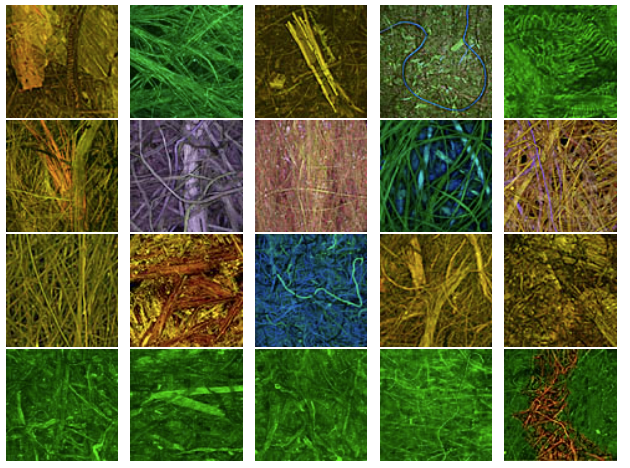 In addition to his contributions to ASU, Valentine was a valuable advisor to the University of Utah’s book arts program. He was instrumental in establishing the program’s book art studio and was integral in the development of its teaching and outreach programming. Valentine’s activities in this program, as well as her typography and papermaking, are archived in the University of Utah J. Willard Marriott Library Special Collection for use in teaching and the research.

“All aspects of the book art have been a journey and a joy for Gene,” Mayer said. “Gene’s wisdom and friendship will be sorely missed by all who knew him.

During his lifetime, Valentin was a beloved husband, father, father-in-law, teacher and friend.

MAYOR Ben Houchen visited a company in Tees Valley that offers to print free NHS tracking and tracing posters for hotel businesses in the area. Shutter Media, based at Teesside International Airport, designs and produces advertising graphics as well as signage, shutter graphics and interior graphics for a multitude of clients, including professional football teams […]

Housing, retail and office space, hotel rooms and tons of underground parking are now closer to arriving in a part of downtown Denver that has been unused for more than a decade. On Monday, the Denver City Council voted 12 to 1 to officially recognize a small area called Fox Park as “degraded,” making it […]

With this new technology, 3D printing comes to life… literally.

If humans are ever to live on Mars or the Moon, we will need to be able to construct buildings to live, sleep, eat and work in space. According to the space agencies, the way to achieve this is to 3D print habitats or their components. But transporting enough of the Earth-derived materials used for […]