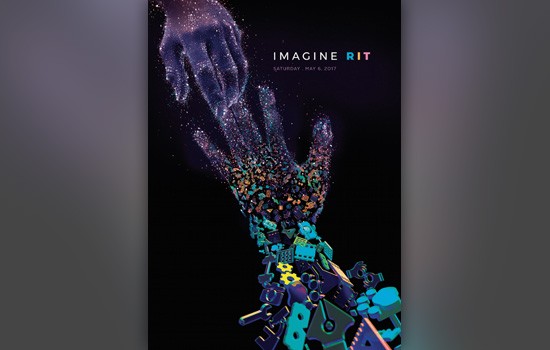 A design of two hands reaching towards each other – one human, the other constructed from pieces of technical parts – is the winning entry of the Imagine RIT: Innovation and Creativity Festival poster competition of this year.

Riley Yankowich, a third-year new media design student from Deerfield Beach, Fla., Created the image and will receive $ 500 in Tiger Bucks as a prize. Five thousand 14 x 20 inch copies of his design will be printed and distributed free of charge to visitors outside the Wallace Center during the festival on May 6.

She entered the competition as a class project, never believing that her design would be selected.

“There was a lot of brainstorming in the classroom,” she said. “Originally I was going to do something like man versus machine, but the idea always came back to the hands and turned into all the tools that students use, with a human hand reaching out to them. the hand. And it shows that humans still have power over the tools they use.

Yankowich had four weeks to complete the design, which included a sleepless night near the deadline when she used Photoshop and touched up 3D icons on the bottom portion of her design.

“I didn’t expect to win,” she said. “I just wanted to make a cool poster.”

Nearly 50 entries were received for the competition.

The finalist was a drawing by Amy Pham, a new media design major from Sunnyvale, Calif., Who designed an image of the head of RIT President Bill Destler unscrewed, allowing objects such as a joystick , a Rubik’s Cube, a hockey puck, gears and a banjo to come out.